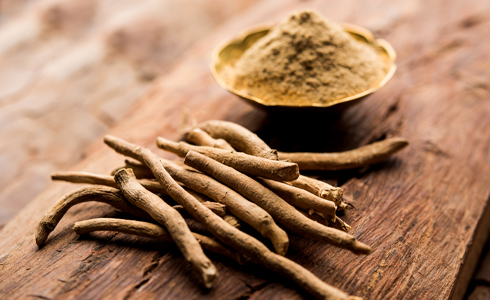 Ashwagandha is a powerhouse of an herb for its ability to reduce stress and enhance cognition. The name means “the smell of a horse” in Sanskrit, which may not be pleasing to the senses, but it also means “to deliver the vigor and strength of a stallion”.1   A powerhorse, if you will!

Ashwagandha has been used for centuries in Ayurveda, the traditional Hindu system of medicine, for its restorative and rejuvenating powers. It has also been used in African medicine for general wellness. While the leaves and fruit of the ashwagandha have traditionally been consumed for their therapeutic properties, the root of the plant is most commonly used.

Ashwagandha as an adaptogen

Studies have shown the adaptogenic properties of ashwagandha; that is, its potential to help  the body adapt to stress.

Ashwagandha increased the stamina of rats during swimming endurance tests and prevented adrenal gland changes of ascorbic acid and cortisol content produced by swimming stress.2  Cortisol is the hormone released in response to stress.

In a study published in the Indian Journal of Psychological Medicine, the serum cortisol levels were tested in 64 individuals with a history of stress. One group received a placebo and the other received 300mg ashwagandha for 60 days. The group taking ashwagandha had a significant reduction in scores on all the stress-assessment scales.3

Ashwagandha as a cognition enhancer

In a study in the Journal of Dietary Supplements, 50 adults were given either a placebo or 300mg of ashwagandha twice a day for eight weeks. The group taking ashwagandha showed significant improvements in general memory versus the placebo group, as well as improvements in executive function, attention and information processing speed.4

In a similar study, healthy men took 500mg of ashwagandha daily and reported significant improvements in their reaction time and task performance, compared to men who received a placebo.5

Naturally refresh your mind and enhance your focus with ENERGY, a CORE4 product. Ashwagandha is an ingredient in the PURE Adrenal Health Blend included in ENERGY.  It naturally energizes without the sugar, preservatives and artificial coloring or sweeteners of other energy drinks on the market.

ENERGY is available in five delicious flavors: Island Splash™, Lemon, Watermelon, Mixed Berry and Grape. Or, get the Variety Pack if you have a hard time deciding like options, or you like to mix your flavors together. ENERGY is available in a tub or convenient stick packs that travel wherever you go.