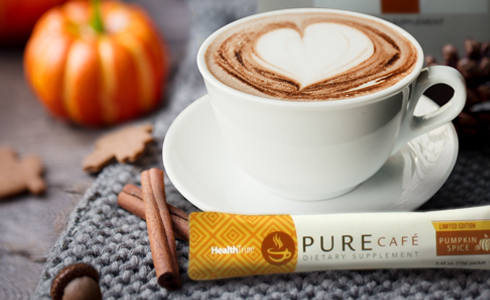 Last year’s fall favorite, Limited-Edition Pumpkin Spice PURE Café coffee drink is back, just in time for fall! To me, nothing says autumn more than the smell of cinnamon, ginger and clove. It’s that warm spiciness from a hot drink or a slice of pie that pairs so nicely with a crisp fall day in front of the fireplace or at a football game.

Every sip of this delicious coffee drink is a party to my taste buds and makes me feel like a kid again. I think the flavor affects us emotionally, reminding us of holidays past or simply the comfort we feel eating a slice of mother’s pumpkin pie, especially when topped with whipped cream.

Not only does Limited-Edition Pumpkin Spice PURE Café taste amazing, it suppresses appetite while it wakes you up (you’ll be less tempted to have that second slice of pie).* Now you can indulge in your favorite flavor all season long, but hurry as it’s only available for a limited time.

We have Colonial America to thank for the tradition

Do you ever wonder where our love of spiced pumpkin comes from? Pumpkin is not listed in PURE Café ingredients; we just associate the spices with the flavoring of the pumpkin. Why is that?

It started with the Native American Indians and then the Pilgrims who used pumpkins as a food staple during the winter months. They would cut the tops off the pumpkins, scoop out the seeds and fill it with cream, honey, eggs and spices. They would then put the pumpkin tops back on and bury them in hot ashes. Once cooked, they served the contents as a custard dish.1

The pumpkin, which is a fruit by the way, was one of the first wild plants cultivated for human consumption in America, making it an extremely important part of our culinary history. Because of their thickness, pumpkins could easily be stored throughout the winter. Over time pumpkins were cooked into pies, stews, tarts, soups and puddings. The flesh could be boiled, roasted, fried or mashed and the seeds were dried and salted as a nutritious snack.

In 1672, physician John Josselyn included a pumpkin recipe in his book New-England Rarities Discovered. This was one of the first recipes to come out of the United States. The side dish called for dicing ripe pumpkin and cooking it in a pot. Once finished, butter and spices were added. 2 This recipe sounds like mashed sweet potatoes that we make today.

In the early 1800s, people started carving pumpkins to celebrate the harvest; they were easier to work with than potatoes. In 1819, writer and historian Washington Irving featured a mysterious jack-o’-lantern in his short story The Legend of Sleepy Hollow, which may have led to the pumpkin carving we do today at Halloween.3

While you’re enjoying your cup of Limited-Edition PURE Café Pumpkin Spice, remember those before us who discovered the pumpkin and helped make possible this amazing tradition.

Pumpkin Spice – it really is the spice of life!

GRAB YOURS TODAY before supplies run out at livepure.com and share it with a friend.